7/29- 0700 hours. Grey overcast. Winds 5 knots, maybe WNW. Barameter29.95 Too high! What will I write today . Main topic- WIND. 0930 hours Etheldecided to take a break, so did I, No wind. Blah. Nothing I can do. It istoo much to de-rig the sail and try to paddle. Ethel will be back in a fewminutes, I hope. 1500 hours. Boy it is beautiful out here. Grey skies,grey, flat, calm, pacifying ocean, no worry about sunburn. Lucky I haveenough food to last at least another month or so. Have not been able tofish cause I am not moving fast enough. I decided the ocean, wind, and weathercan do what they want, I control what happens inside this craft and mind.She realizes (previous three) that sooner or later they will lose, causeI am taking over inch by inch. This El Nino must be why it is so calm.The Transpac that left three weeks ago did not have the same weather thatI am experiancing, I am sure of that. My course is too far south, butdue to the SW winds, I can not make any west headway. I made it, I eatit! 2000 hours. Sky has now become clear. Will see alot of stars tonight.Still no wind, but at least I see the heavens!

7/30 Saw the heavens for a while, then more clouds. It is now 1300hours and have an average < 3kts. of wind, even though there is a 10-15foot swell from the NW here. It is teasing me, making it harder. Many sailorsin the past have gotten in the doldrums before and have gone completelycrazy. Really crazy. I am not crazy, just appear to be. Frustrated is moreof a correct word. I know as soon as I de-rig this sail so I can row, thewind in puffs will come back. I can move if there is 5 knots or more. Under5 knots, it is so hard to hold the sail up for hours. If I had a tall building, I would jump. Now I am only 2" from the water. 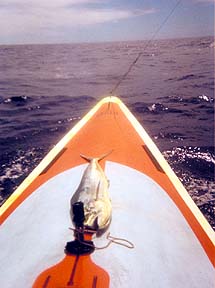 Ya gotta eat and even though Fisher still had supplies, nothing could cure the canned dinner blues than a fresh mahi mahi or Dorado, as it is called in the part of the Pacific he was coming from.

7/31 This is really going to be messy. Remember that wind thatwas teasing me, now we are in it. I am now cooking dinner at 2030 hourswith 15 knots from the NW outside. It is really gusty, sometimes 8 knots,other times it blows 20 knots. Took a rest at1700 hours and a six footblack tip shark came by looking for a dinner. When he saw my beard -ugh!-he took off. I am sure I made some good headway. Must have been reachingat 8 knots or more. My course is about 250* and I can make it. I am tryingto head upwind a little to get out of the NW winds and into the NE winds,plus it will help me when I start to fly the kite. 30* 09N 120*32W Tomorrow will put up the smaller mainsail that has zippers. I was overpowered withthe one I had today and that is not smart. The first part of this tripwas frustrating- No Wind. This part from here on out will involve no mistakes.Be cautious, cool, and not over-excited. Time goes by faster now and I shouldbe able to make around 60-70 miles a day. I am okay, does not seem liketwo weeks have gone by. It is fine that I am not where I wanted to be, theultimate still can be achieved - a handful of sand smeared all over myface.

8/1- 2100 hours: 29*58N 121*26W It is going to be wet andwild from here on out. Well from 3 knots to 30 knots, plus 20 foot seas.We handled well, plut up the small main,even a couple reefs. Hove to now.Riding not too bad. These 20 foot seas do not break that bad, so it is somewhatsafe. We just ride up and down and bounce all around with the sea anchorand sail holding us in place. Passed 1/4 of a mile by a freighter that isheading for the Panama Canal. Radio did not work, but I wonder if he calledthe Coast Guard. "What in the hell is that orange thing out here?"We sailed hard doing 8-10 knots an hour. Just had a wave break on D.S.II.We be ok! Still have NW winds. I need the NE to really make some good timewith the kite. Gotta go. P.S. I bet the world is wondering if I am ok,well world I be fine! 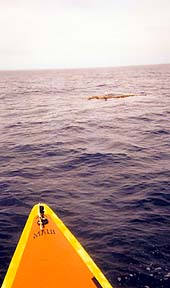 8/3- 1200 Hours.Beautiful sunny (the last three were) wind 15 knots N. Just took a shower.Friday was rough, NW at 30 knots. I worked hard that day. Wanted to crossthrough the wind, so my course was west. Tough sailing in the trough with20 foot seas. At times I felt like I was in a tunnel of H2O. Sometimes thewaves would break and I had to sail through them. Sat. was easier, butI put in alot of hours. Today is more cruise. Soon I will put up the kiteand speed will come in to play. Rigged the sail and sea anchor differentlast night. No good. Put a rip in the sail. My fault. We be OK, but mistakesare not allowed. None. Survival in rough seas means being open and on guardalways. The Edge- you do not go over. Period. Hey something I knew was goingto happen - voices - different kinds. This craft makes alot of different voices, even when sailing. Especially when I am planing at 10 knots. Everythingcool. Being wet all the time is tough. Sleeping with this survival blanketis warm, but I still am damp. Time to go. Gonna listen to Led Zepplin. 2000hours. Well finally got nailed by a wave. It did not flip the windsurferover, but I got soaked. Finished early today. 15-20 knots. Winds are nowout of the N. Seas are smaller, now but it seems as if I am getting nailedharder. My mind seems to play games with me. Another dimension keeps fadingin and out. Can not quite explain it. Maybe more will happen later. Gonnaget alot of rest today. Tomorrow I fix the small rip in the main and thenput up the kite. Cool. Hope so! 29*10 N 122*47 W

8/4- 1900 hours. Got wet three times today. Not a good batting average. Once while putting up the kite and twice while sailing. Both times I was completely dry. Really pissed me off. Also lost a knife ot of my pocket. I have two more, but that is a mistake. So it is sunny, winds NNW 15 knots. Not too rough. Got the kite up and it sails fine. Pulling me downwind at 1-2 knots. I am dragging the sail,`cause after getting wet I had to get out of the wind - cold. Everyday it will be warmer, the winds more in my favor, and closer. A couple days ago all I thought about was finishing this trip. I am better now, take a day at a time. The only race I am in is the one that puts me on the beach on Maui, SAFE. I am trying my hardest to stay dry. That is the most difficult part so far in this wind leg. The first leg was no wind . The last leg will be more mental. Closer to home, means more excitement = more mistakes. A 100 miles or a thousand miles from Maui a mistake is a mistake. So far two, the torn sail - my fault - the lost knife - 1/2 my fault. The angle I sail to the waves now is the hardest not to get caught by a wave. When the winds start to come out of the NE, they will be behind me, so will the waves, and I can go with them. The kite is cool, just hangs about 60 feet in the air dangling a frog to steady it. I wonder what the reaction will be when people see DS II being pulled by a kite with a frog up there. " Where in the hell did that come from?"