THE JOURNAL OF DA SLIPPA II

The following is a trascript of a log kept by Capt. Steve Fisher as made his journey across the lonely expanses of the Pacific in only a one-man windsurfer. The follwing log is presented, unedited. Alongside the entries of the log are photos that Fisher took on his journey as a record of his feat and, while assembled in no particular order, they will hopefully help bring to life his amazing solo journey.

Hey, I just had a 32 foot sailboat come by me and ask me if I needed help. "No"was my answer, but I wonder if they need help. Presentlyout here with my sea anchor set, drifting on a flat sea. They are motorsailing with full sails going in circles. High seas, drunk driving!! Iwould not have gotten on that boat if this was my 100th day and I was onlyoff of Catalina Island. Well, its my 3rd day and I'm off of Catalina Island. So far I haven't had the winds in the right direction. First day triedto get offshore. 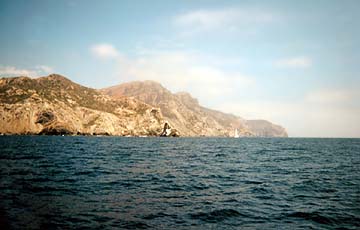 The view of Catalina as seen from the Da Slipper II as Fisher made his way out towards the open Pacific. After this shot the next stop, he hopes, is Hawaii." There is a sealbarking out there somewhere, probably at the drunk boat." Windshave been 0-5 knots most of the time, sometimes 10-12. Really hard to makeany headway. Saw seals first day, whales second day, and seals the third. Tomorrow if the winds are okay, I should make some decent headway. Chowtime

7/22-Tuesday 1645: As the tide turns. Presently on the island of Catalina repairing a seal on the watermaker. I know what happened and I believe it is my own fault. On the intake line, I ran it through a thru-hull fitting. This restricted the intake flow, hence a simple blown seal about the size of a dime. Anyway, we be okay and back in business. In a small little sheltered harbor called Cat Harbor. There is an isthmis about a 1/2 mile to the other side to a busy Catalina Harbor. Last night the Los Angelos firefighters had a big party and I crashed their BBQ. Got the wartermaker fixed today. Head is cool, body is cool, Da Slipper II is cool, but where is the decent wind? I know I'll get some, but the first 100 miles are going to be the hardest. A few locals have said the winds are lighter than normal because of the El Nino. Hopefully, I'll have enough to get away from these islands. Otherwise, not much else to report.

7/23-Wednesday:2145 hours- Finally had some good winds. Sailed a course of 210 degrees-35 degrees off of the course I want. That'sokay because I had 10-15 knots of wind and calm seas. Saw alot of seals,plenty of whales, and even sailed up on a dead seal that was drifting onthe surface. It was white and bloated. Quite a nasty sight. I'm hove towith a sea anchor and my sail holding me in place. It works quite well,but it is sure noisy in here. Waves slap on the bow all the time. I'm offof San Clemente Island, which the Navy uses for bombing. They are doingsea exercises and all day I have had the ships circling me. They have beenbombing the island and I haven't seen any bombs, just heard them. Had ahuge supper, tabouli and noodles, with paramsean cheese. Got plenty of foodhere.